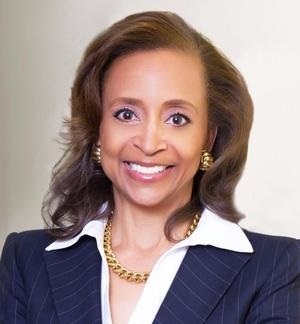 Ms. Creuzot was recently appointed by the Mayor and the Houston City Council and sworn in as a Commissioner of the Port of Houston Authority.  She is the first African American woman to serve in the Port’s 116-year history.  She serves on the Audit, Governance, Dredge Task Force and the Community Relations Committees.

Ms. Creuzot carries the same spirit of service delivery to her numerous civic and charitable endeavors. Ms. Creuzot serves on the Board of Visitors of the MD Anderson Cancer Center (Vice Chair, Finance, and Capital Planning Committee), as well as the Vice Chair of the Board of The Frenchy’s Companies, a 53-year-old family- owned restaurant and food processing organization.  Ms. Creuzot is a member of the National Association of Corporate Directors, The Texas State Bar Association and The Financial Planning Association.

In addition to extensive civic service, Ms. Creuzot has received several political appointments.  Ms. Creuzot was appointed by the Democratic National Committee to serve as the state co-chair of the Women’s Leadership Forum.  Most notably, in 1993, Ms. Creuzot was appointed by the Governor to a six-year term on the Texas Public Finance Authority Board, a politic corporate body created to provide financing for state agency facilities.  Ms. Creuzot served as Vice Chairman of the Authority from 1995 to 1997.

A published author of many articles on the subject of financial planning, Ms. Creuzot is a resource for print and on-line media and has been quoted in MONEY, Mutual Funds, Black Enterprise, and Essence magazines.  She previously co-hosted local talk show radio KPRC’s Organizing Your Life, and the local 102.5 FM radio show called Let’s Talk Money. Ms. Creuzot recently published her first book entitled Real Lives Real Money, which was featured in the November 2017 issue of Essence Magazine.

A sought-after speaker, Ms. Creuzot was a keynote speaker for the 2020 and 2019 Financial Literacy Conference for the Alpha Kappa Alpha Sorority.  In 2018 Ms. Creuzot was the keynote speaker for the Houston Area Urban League Young Professionals and the Association of Women Corporate Counsel.  She was a keynote speaker at the 2017 Essence Festival, and the featured speaker for the National Sales Network that same year.  She has also spoken at the 2012 Women’s Leadership Academy Summit, and the 2010 African American Financial Professionals Conference, and the 2008 National Bar Association Conference.  Ms. Creuzot was the 2009 commencement speaker for American Intercontinental University.  Ms. Creuzot has also addressed Essence Magazine’s Women Who are Shaping the World Leadership Summit, the State of the Black Union, the National Coalition of 100 Black Women, Megafest, the National Conference of Black MBAs and the Junior League of Houston.  In 2002, she was selected to participate in the Center for Houston’s Future Leadership Forum, a business and community partnership.

Ms. Creuzot’s community and alma mater have recognized her for her outstanding leadership. In 2018 she was named one of Houston’s Top 30 Women.  Th Houston Area Urban League awarded her with the Marguerite Ross Barnett Leadership Award in 2017, and the Houston Chronicle named her as one of the Top Businesswomen to Watch in 2016.  The University of Houston, African American Studies Department, presented her with the Marguerite Ross Barnett Leadership Award in 2014, the same year she was inducted into the Greater Houston Women’s Hall of Fame.  The Houston Women Magazine honored her as one of the 50 Most Influential Women of 2013.  Ms. Creuzot is the 2012 Honoree of the Houston Easter Seal’s Hats Off to Mothers, and was a recipient of the Corporate Sector Achievement Award from the University of Houston Law Alumni Association (2012).  Additionally, she was awarded the Distinguished Alumni Award from the University of Houston (2011).  Ms. Creuzot has been recognized three times by The Houston March of Dimes (2004, 2006, and 2008).  She received The Women of Distinction Award from the Houston Chron’s and Colitis Foundation (2008), and the National Black MBA Leadership Empowerment Award from the Houston Chapter (2004), along with the Super Achiever Award from the Greater Houston YMCA (2001).

She is a member of the Texas State Bar, the Registry of Financial Planning Practitioners, the Financial Planning Association, and a former Top of the Table member of the Million Dollar Round Table.  She carries the CERTIFIED FINANCIAL PLANNER ™ (CFP®) professional designation and has been named one of Texas Monthly’s Houston Region’s Five Star Wealth Managers (2012, 2014, and 2015) as well as a Top 100 Advisor in the country and Financial Planner of the month by Mutual Funds Magazine (2001 and 2002).

A native of Washington, D.C., Ms. Creuzot has called Houston home since entering the University of Houston as an undergraduate freshman.  She is married and has three children.

Certified Financial Planner Board of Standards, Inc. (CFP Board) owns the certification marks CFP®, CERTIFIED FINANCIAL PLANNER™, and CFP® (with plaque design) in the United States, which it authorizes use of by individuals who successfully complete CFP Board’s initial and ongoing certification requirements.

*The 5 STAR award is not indicative of the wealth manager's future performance. The overall evaluation score of a wealth manager reflects an average of all respondents and may not be representative of any one client's evaluation. For more information on the FIVE STAR Award and the research/selection methodology go to www.fivestarprofessional.com.

**The overall evaluation of a top advisor reflects an average of all respondents and may not be representative of any one client's evaluation. The award is not an indicator of future performance or success. Criteria is based on information gathered by reporters and editors of Mutual Funds magazine who research planners based on experience, credentials and other related resources.